Lithuania: The ancient mound of Apuolė

The ancient mound of Apuolė is located in Apuolė village, Lithuania. More than a thousand years ago Apuolė belonged to the Swedes, but residents got rid of them. Taking advantage of this the Danes attacked Apuolė but were defeated. In 853-845, Swedish King Olaf with a large army attacked a Curonian town called Apulia protected by 15,000 soldiers from 5 regions... (Source: skouds.lt)

I always believed it is important to know your roots. The beauty of The mound of Apuolė fascinated me since I was a child. As this ancient site is located only 11km away from my hometown Narvydžiai, I've been here more times than I can remember.

Those who already saw 'Samogitia: The land of fearless Warriors', posted by my husband a few days ago, already had a chance to get to know the mound of Apuolė from another perspective. This time I would like to take you on another journey. A journey through seasons.

Winters in Lithuania can get unforgiving. Most likely they were even colder during the times mentioned above. The circle of life and death never stops and what's lush and green in summer has to give up its place to snow and ice as those two opposites do not coexist together.

Heavy snowfall is usual during the months of December, January, and February. The temperature might fall below -25 degrees Celsius. It might be rare, but not uncommon. Something to know when planning to come here in cold months of winter. It leaves you wondering how people lived here without those modern electric heaters and fancy thermal clothes. 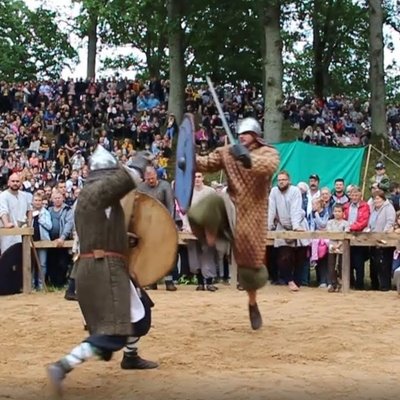 Samogitia: The land of fearless Warriors!

Samogitia (lt. Žemaitija) is one of the ethnographic regions of Lithuania. The homeland of my dearest wife. The land of the fearless warriors and one[...]

Mosėdis: The Museum of Rare Stones & The garden of Intas

Long story short, Mosėdis is a town in Western Lithuania that has just over 1 thousand residents. It is 17km away from my hometown Narvydžiai, 17.4km from Lenkimai, 52.6km from Palanga, and 15.9km from the ancient Mound of Apuole, places my husband and I have mentioned before.   Tour guides like to introduce Mosėdis as 'the Capital of Stones'. The

Narvision: The sea of sow thistles

You might have two questions: where is this Harry-Potter-sounding place called Narvision located and how the heck did she find the drone controller after filming herself in such a wast field. Short answer: officially such name of a place doesn't exist and no, I could not find the drone controller. Well, at least for a while... The real name of the

The mound of Ekete: It's where the warriors lived!

Here is some travel advice to those who dare to explore the depths of Lithuania. I'm not saying there is something wrong with partying all day and all night at the craziest clubs and pubs in Vilnius or baking in the sun on one of the golden beaches of Neringa. It's perfectly fine. However, if you want to taste the essence of this ancient land, you